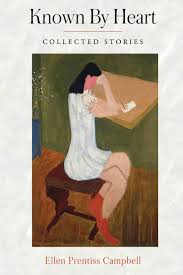 Ellen Prentiss Campbell’s second story collection, Known By Heart: Collected Stories, is set in pastoral Pennsylvania and suffused with Quaker patience and ethos, a sensibility that resonates with our pandemic seclusion. Prentiss Campbell’s previous collection, Contents Under Pressure, garnered a National Book Award nomination, and her debut novel, The Bowl with the Golden Seams, won the Indy Excellence Award for Historical Fiction. She knows her way around a story.

These latest selections offer up tales of love in its all flavors and seasons: long-lasting spousal love, ministerial love, family love, forbidden love, rocky love, stolen love. The Thomas Hardy epigraph on the final story seems to unite them all with its embrace of yearning and nostalgia: “The sweet sharp sense of a fugitive day/Fetched back from its thickening shroud of gray.”

Throughout Known By Heart, Prentiss Campbell’s language is precise and succinct. Settings are economically and authentically wrought. We plug straight into the scenery, for example, when “[m]ist rose out of the valley like boiling steam,” in “The Spring.” In the same story, when we learn that “Cora knew every wildflower and tree as well as she knew every family up and down the ridge,” the landscape marries with its culture, further immersing us into the essence of the place. Similarly, when Alan takes his wife Grace to close down their summer farmhouse for the season in the title story, the lines, “[m]ost of the old fields were grown over now, the woods crept closer to the house every year like tide up a beach” aptly deliver the gestalt of this story’s place.

With quick, supple turns of phrase, Prentiss Campbell draws characters who are sublime with complexity. In “Problem Set,” a story of a love affair between a high school physics teacher and the husband of a comatose woman, “Joy feared that bringing Daniel too close would upset their homeostasis. She dreaded exceeding her capacity for intimacy,” her own squeamish need for solitude further complicating a love affair already in perpetual suspended animation due to Daniel’s wife’s condition. In “Known by Heart,” Prentiss Campbell sums up a decades-old marriage with, “What he noticed and she forgot, what she attended to and he neglected, had become part of the complementary distribution of labor in their long partnership,” depicting this couple’s interdependence along with the pathos of Alan’s desire to offset the larger depletion from Grace’s decline into dementia with his own ebbing powers.

Also interesting is how the stories in Known By Heart roam through time, from the contemporary trauma of losing a child to a car wreck in “A Long Time to Be Gone,” to the marital tension paralleling the divisiveness of the Vietnam protest era in “Faith and Practice,” to a story of lost love from a nebulously more distant past war in “Fugitive Day.” Characters wander in and out of the stories and across time, too. They might pop up after a lapse of several years, as with sisters Kate and Frances in the title story and in “Estates and Trust,” witnessing the slow demise of their mother’s health from the sidelines in their first appearance, then settling the family’s affairs after their father’s death years later. The vantage often shifts when characters reappear, as with the previous stories, and with Meg who headlines “Invisible Ink” and “Never After,” two stories exploring different moments when a past love threatened her marriage, then she drops to niece of a side character in “Ruby.”

The Quaker faith weaves through the collection as well. The couple whose troubled marriage steers “Faith and Practice” also lead a Friends school together. The faith interacts with the conflict of the times, with “[t]he members of Clear Spring Meeting disagree[ing] over how far they should go in putting the Quaker peace testimony into practice,” a rift that eloquently illustrates the tensions pulling the faith community apart as well as the ones pitting the couple against each other. The Quaker practice of “seeking clarity” informs the budding sexual curiosity of Annie in “The Spring.” The story ends after Annie “peered into the clear, still spring,” then deliberately mucked it up and waited for it to settle again, to clear, but, “[s]he could not read any message in the clotted foliage floating in the water.” Her efforts at gaining sexual clarity seem lost, or at least frustrated, when she reappears in “Antiques and Collectables” as a pregnant teen seeking refuge.

Glimpses of humor appear, especially in “Your Guardian, Angela,” a story of an unwittingly unseated old salt advice columnist, but for the most part these are contemplative stories. Each one opens gradually and gently. They’re best savored slowly.