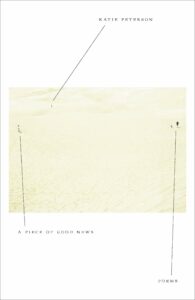 Katie Peterson’s A Piece of Good News is intimate, as if whispering into the reader’s ear the foundational human questions of love, endings, grief, and faith. Peterson considers the natural and the constructed world, her poems sampling myth, pastoral scene, inner dialogue, and the small items of the everyday. The scenes in these poems are tangible, well-drawn, and filled with wonderment. They are like watercolor paintings, the artist disregarding the clean lines of reality for a truer sense of place, colors bleeding outside lines and blending to create an evocation of not only the physical landscape but also the painter’s interior, felt landscape.

A significant poem for the collection is “The Massachusetts Book of the Dead,” found in the first half of A Piece of Good News. The poem is sectioned into one- to five-line vignettes, each of which seeks to understand the death of the poet’s mother. Together, these small scenes build clarity not in narrative but through image and emotion. Peterson moves between the pastoral, cultural, and domestic, calling forth both literary and personal histories. Here is the first section:

In Massachusetts, the sun of winter

is disappearing behind a fragile field

rising from the bedclothes to fasten

her corset and stay inside all day.

Here is perhaps the whole narrative of the poem in these first five lines, the first way in which Peterson tells the story of her mother’s death. The pastoral language here is bleak, cold, lifeless. By summoning Emily Dickinson, Peterson brings to mind Dickinson’s personal history as well as her entire body of work: reclusive, depressive, obsessed with and haunted by death, and wholly brilliant. Peterson layers all these qualities overtop the speaker, whom we insinuate into the described scene.

All of “The Massachusetts Book of the Dead” which follows this first section reads as reiteration and elaboration, each scene adding to the emotional architecture. Some read as imagist or haiku, others describe brief moments in which the loss is rediscovered. A few seem almost completely disconnected from the larger narrative (though nothing truly is disconnected, in the sense that all of life changes after a parent’s death). Peterson also inserts a refrain about “the recluse” (i.e., Dickinson/the speaker) as she discovers ways to cope with life after tragedy:

Said of the recluse: she loved music

drifting up the staircase that she saw

as the only portal to a world

whose code of conduct she disdained

“The Massachusetts Book of the Dead” solidifies themes which Peterson carries throughout the rest of the book.

Peterson does not seek to answer the questions A Piece of Good News asks. In “The Bargain,” Peterson writes, “the man has weighed a piece of paper with a list / of all your transgressions…Then someone comes / who wants you to see the sunset, tells you to rejoice.”

Ultimately, though, Peterson can’t decide if this bargain for new joy is worth it, or even truly possible: “But when the sun goes down, you wonder what it weighs.”

In the last stanza of “The Massachusetts Book of the Dead,” Peterson writes,

You could take your revenge on life

by living more years of it, sheer persistence.

You could fish the map instead of the river.

You could drink a boiling cup of tea

and burn your throat into a sunset.

This fragile hope is “good news.” Without falling into despair or sentimentality, Peterson invites us to celebrate our continued and mutual desire to live, even in the midst of inescapable grief and loss.

Hannah Marshall is an MFA candidate in poetry at Converse College. Her poems have appeared in The Madison Review, Anglican Theological Review, RipRap, Wisconsin Review, Big Muddy, Stoneboat, and others. She lives in south-central Illinois, where she works at the public library and as advisor for Greenville University’s literary journal, The Scriblerus.