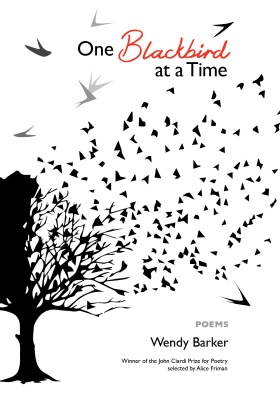 One would be hard pressed to name a book that is a better defense of the value of teaching poetry in the classroom than Wendy Barker’s One Blackbird at a Time. Each poem is not only a memorable narrative account of a significant teaching moment in the career of a master teacher of literature, it is also an addition to the rare canon of poems that teach, by example, both how to write a poem and how to live a life. That’s because every poem—from the opening “I Hate Telling People I Teach English” to the final “The Last Time I Taught Robert Frost”—is a poem of discovery, as well as one of witness. Barker goes far beyond merely expressing previously arrived-at truths—her poems are investigations into the depths of language and thought and emotion, brought together on the page in the same way that a class of students is brought together for a semester: ephemerally, yet after a time, as familiar as family, as if they have always been together and will never part. This growing intimacy between the poems and stories that inhabit Barker’s poems, and the students’ own experiences and, often sophomoric, responses to them, mediated by the scholarly and existential understanding of the poet herself, allows for complex interactions that exude authenticity.

In “His Eyelashes Are Not Tarantulas,” for example, Barker relates the experience of a “star pitcher / on the university team—bare / arms so muscular I’m amazed / any straight woman around this table can utter a word” reading a poem he wrote in her poetry workshop. But if the student’s physique fulfills the teacher’s image of the ideal, his poem falls short.

his printout and toss the pieces into

the nearest recycle bin. His poem

on his kitchen counter, but when the “I”

licks and nibbles “her” moist flesh,

we learn “she” is only an apple. How do I count the ways I could sneer

his poem’s fouled out?

Although the other students are enamored with the poem, the narrator only has eyes for the student poet who takes her back “fifty-some years to [her] first steady boyfriend:”

the one I even thought about marrying,

The poem then recounts the story of how she had lunch with her old boyfriend the previous summer, and how he reminded her that she “dumped him not once / but twice,” and how he’d never forgiven her, “his back / rigid as a Louisville Slugger while / he insisted on paying the bill.” After a snippet of a student’s comment at the end of that summer—“Oh Dr. Barker, your shoes are / adorable, they’re just like the ones my mom / wears!”—the poem carries us back to the present where another student offers a plausible, yet incorrect, explanation for the apple conceit. But before the narrator resumes her teaching role, the poem sidesteps to her humanity, her mortality, as it asks “Where is / that smooth-skinned girl my boyfriend loved?” and only then closes with some literary criticism filtered through decades of both teaching and loving:

…So I tell him

if he just described an apple

so we’d hanker for its tang.

In the hands of a lesser poet these poems might turn out formulaic: each beginning with a reading or writing assignment; then some kind of disconnect between student and story or poem; a flashback to a story from the poet’s past or a sidestep into the student’s present; and finally a return to the original poem or story assigned, applying the insight gained. But Barker demonstrates that the deep truth of taking “one blackbird at a time,” is that one poem or story, like one life, is valuable precisely because there is none other like it. Collectively, these poems flock together around the themes of teaching, writing, and living, and yet each is allowed to dart and sweep freely where it may, so that the reader can never predict how many times a poem will light, or exactly where it will land.

In “Arriving at Wallace Stevens in the 13th Week,” for example, the form of Barker’s poem is a straightforward narrative relayed in the present moment, enacting its content with the release of an irritation brought on by a student “[finding] what isn’t there / in the poem’s portrayal of a woman’s seaside / singing. For once,” says Barker, “ I let Tony be artificer of his own notes, even if dimly starred, as he strides alongside the poem, thwarting my blessed rage for order honed by forty / years in classrooms.”

Yet I want him to slip

barefoot into the poem’s curling surf, want him to swim out

into the noctilucent swell of it with no guiding moon

or pinpoint of harbor light, just the rise and fall of the waves

with their unpredictable lines, the undertow

of the water’s elastic weight…

The power of riding the book’s singular narrative arc through all five sections in Barker’s trustworthy voice is undeniable. If I have one quibble, however, it is that I would like to have seen an interlude midway through—a series of poems, perhaps in the voices of students, responding to the lessons, or a “private” email exchange, or the teacher’s diary entries at the close of each of several days—something to expand the context in which the poems and stories were taught, and life was remembered, outside of the classroom setting, in order to augment the material in these narratives. But Barker is virtuosic with what she does in these poems, and with getting on and off the page, into and out of the book—with how to “begin a life or, I’m thinking, end” one—whether the life in question is of one line, one poem, one writer, or one student.

Barker is always thinking about her students—and we, as readers, in light of her facility with poetry, and vast experience in the classrooms of both literature and life, become her students, as well. In her opening poem, “I Hate Telling People I Teach English,” she dreads what’s coming at parties when she “own[s] up:” because they either say, “‘I hated English, all that grammar, / you won’t like the way I talk, you’ll be correcting me,’ and suddenly / they need another Bud or merlot or they’ve got to check out / the meatballs or guacamole over on the table” or someone says  “he [has] a manuscript right outside in his Camry and / could I take a look, no hurry, but he knew it would sell, could I tell him / how to get an agent for his novel about his uncle / moving to Arizona and running a thriving ostrich farm until the day / hot-air balloons took off a half mile away.” Or, as in “Preparing Jeffers’ ‘Vulture’ Before Class,” even as she is riffing on death, she is weighing the merits of each potential teaching illustration, each metaphor:

…So I’m wondering if I should

mention what happened a year ago when

I turned from a booth on

wind power at our neighborhood’s GreenFest to face a Eurasion

into me. I don’t know

how long I froze, swept into that centered gaze. I guess tonight

I could propose that maybe death Jeffers’ way

wouldn’t be worse than

the doctors’ slipping a gastric feeding tube into my father’s

stomach, puncturing his lung, then jamming

a ventilating tube down

his throat, after which her never talked again.

The poet Alicia Ostriker speaks of metaphor as “a sign of love, …what language uses to show that the world is full of connections.” Barker’s poems demonstrate that purpose, and this one reaches to its deepest calling. After speaking of her mother’s death (“she gave up eating, / and then, even water. She’d / never read the Dylan Thomas poem, never raged against / the dying of the light”), Barker asks “but is it really light / that leaves?/ I know what Goethe / said, but is it really light / that leaves?” And then a few lines down she asserts: “No wonder / people say those birds connect us with / the universe.” The final connection of the poem is the enactment of the final line, a commentary on Jeffers’s line about the toddler, lost for three days, who was found on a mountain peak beside a vulture, “…smiling, utterly / unhurt, though on his / grimy shirt were pierced two sets of talon marks, a rip / from a hooked beak. ‘What an / enskyment,’ says / Jeffers,” and “What a way to begin a life, or, I’m thinking, end.”

What a way to begin and end a poem (or a collection of poems), I’m thinking— simultaneously tying things up and leaving them loose—making connections between images, yet not referencing each one, not doing the reader’s thinking for her, giving the reader just enough to want more. In “The Last Time I Taught Robert Frost,” Barker relays the story of how, on her father’s deathbed, she recited a poem different from his favorite, “Stopping By Woods.” As the last act of the final day of class, the students read or recited Frost’s poem. Reading Barker’s final lines in the book, the sense of accomplishment and the foreshadowing of loss for both teacher and students finishing the semester intertwine with my feelings about the completion of the reading of this transformational collection of poems, written by one of the best poets of her generation at the height of her powers:

I can’t explain it, but for once

something dark and deep entered among us in the overly

air-conditioned room. As if we were all one self and yet still alone

in the cold, and wanting to stay. When we spoke again,

we talked until I had to stand up, open the door, and tell them

to leave, say it was past time for their dinners and

all the lovely, nagging promises waiting for them to keep.

Terry Lucas is the author of two prize-winning poetry chapbooks: If They Have Ears to Hear (winner of the 2012 Copperdome Chapbook Contest from Southeast Missouri State University Press), and Altar Call (published in Diesel, the anthology of the 2013 San Gabriel Valley Literary Festival). His two full-length collections are In This Room (CW Books, 2016), and Dharma Rain, forthcoming from Saint Julian Press. Terry is the co-executive editor of Trio House Press, and a free-lance poetry consultant at www.terrylucas.com.