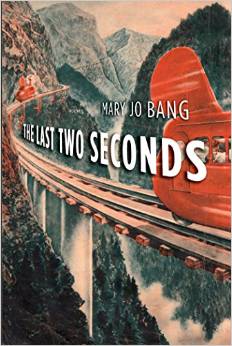 In The Last Two Seconds by Mary Jo Bang, the poet dissolves the distinction between language and content, and hearkens back to a day when a story told or information conveyed were as important as the typographical, sonic, or sensory devices employed, producing lines such as these from “Had There Been:”

can become. She said she gardened now. She was surprised

she still remembered that. Blind slats let in an inch or so of sun

times the length of the window. Outside the sigh of a braking bus,

the length of the street times once upon a time. The story began,

“This is the corner where the murder took place.”

The elevation of content in the above passage to at least the height of its language is emblematic of the blurring of genre in this book, not only in the relative importance of its complex, sometimes opaque, ideational element that often upstages its quite accessible diction, but also in the nature of the content itself—in this instance, the “inch or so of sun times the length of the window . . . the length of the street times once upon a time.” While Bang’s deceptively simple word selection is both quite necessary and quite virtuosic, given both the depth and breadth of writings from which almost each poem is gleaned, I must mention that her lengthy notes referencing the works and the processes by which she created her text are as much a part of the manuscript as the poems, reinforcing the relative position of content in the poet’s prosody.

In her note to “You Know,” for example, Bang states that the poem is an ekphrastic response to a mixed media installation, Flooded Chambers Maid, and lists several of her additional poems dealing with the theme of time—perhaps the most prominent theme of the book—published in conjunction with the exhibition, Jessica Stockholder: Grab Grassy This Moment Your I’s, February 12 to May 29, 2011. Time is referenced both directly and indirectly throughout. Like the metronomic ticking of a clock, it insistently inserts itself (like the information from her notes), into the world of these poems, reminding readers that there was a beginning and that there will be an end to both history and words about it: “ . . . as if history were a sound / that could pry apart an ever-widening abyss.”

It is from this abyss that Bang writes. But it is not a wholly foreign place. In the lines “ . . . The idea, she knew, was to remain awake, // and while walking through the day’s gray fog, trick the vaporous / into acting like something concrete . . .” she is hovering between events and the sounds we make about them. When she declares “I’m sick of explanations. A life is like Russell said / of electricity, not a thing but the way things behave,” we glimpse life somewhere between verb and noun. When she states “ . . . every chapter / once was titled The Moment Is the State Suspended,” we are confronted with a stasis that suspends time itself. And for all of Bang’s concrete images, she frequently takes us to the blurry world at the edge of abstraction with language like “in the margin of fear.” Most of the passages above are from poems that have paragraph-length notes—indispensable to the complete understanding of the book—because they serve as a final “found poem” that illuminates many of its slant and somewhat obscure references.

In the remake of the classic sci-fi film, The Day the Earth Stood Still, Professor Barnhardt is making an argument for humanity with Klaatu, the alien come to save the earth by destroying the human race that has abnegated its responsibility of taking care of it. He says “You say we’re on the brink of destruction and you’re right. But it’s only on the brink that people find the will to change. Only at the precipice do we evolve.”

For all of her confidence in content as an equal partner to poetic devices, Mary Jo Bang is not as hopeful about the outcome of history relative to the success of her poems in this collection or in her title poem, “The Last Two Seconds.” Hear its concluding lines:

Lying on her back, looking up at the glass eye, light

furrowed the future. She saw her own inimitable way

of seeing what is missing and sweeping a floor

and setting up a table and winding a timepiece,

and throwing a voice. When she woke, a rash

was making her a manikin spattered with crimson

A convincing conspiracy of one stood on the blade

of that odd state called over and done with. Outside,

rain at the window created an instant vertical sea.

in the haze. She looked back blankly and said, the mind

isn’t everything, only a gray-suited troop of mechanics

working to ratchet the self through the teeth of a wheel.

In The Last Two Seconds Mary Jo Bang finds no solution to how to stop the inevitable countdown of the doomsday clock. But, ironically, she does find a language to chime in the gap between the questions and the answers, with humanity lying on its deathbed. And, after all, isn’t finding that language the purpose of poetry?

Terry Lucas won the 2014 Crab Orchard Review Special Issue Feature Award in Poetry. His most recent chapbook, If They Have Ears to Hear, won the Copperdome Award from Southeast Missouri State University Press, and his full-length collection of poems, In This Room, is forthcoming from CW Books in February of 2016. Terry is Associate Editor of Trio House Press, and a freelance poetry consultant at www.terrylucas.com.