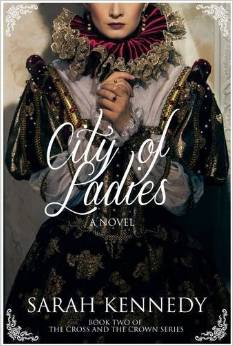 City of Ladies is the second novel in Sarah Kennedy’s The Cross and the Crown series, and picks up several years after the first book, The Altarpiece, ends.

The setting is King Henry VIII’s England. The Catholic Church has been abolished; nuns and priests still holding allegiance to Rome are persecuted and homeless as former church properties are seized. Even for those former nuns and priests who have switched allegiances from Rome to King Henry VIII, life is difficult for they live under clouds of suspicion, fear, and doubt as to their loyalties.

Former nun Catherine Havens has married William Overton and is the mother of two children, having just given birth to her second child, a daughter. She is content to stay home and be mother to two and mistress to a great household, but William Overton has other plans for his wife, also renowned as a healer.

Princess Elizabeth Tudor, lives in isolation with her sister, Mary, in Hatfield House, far from Catherine’s home in Havenston. When William arranges for Catherine to live at Hatfield House and care for Elizabeth, Catherine must go. But she leaves behind a household in turmoil.

Over time, Catherine has created a City of Ladies at Overton House; former nuns with nowhere else to go. Catherine dreamed of her former sisters serving in the village of Havenston, but then they begin to disappear. One is found murdered and another is missing when Catherine is forced to go.

At Hatfield House, she finds Elizabeth and Mary living in near poverty, while their sickly brother Robert lives a life of luxury. Mary is the daughter of Henry’s first wife and a devout Catholic in a land where Catholicism is illegal. She is also close in age to Catherine, and Catherine finds herself drawn to serve Mary, even though practicing the Catholic religion is illegal, and punishable by death. Elizabeth has health issues, and Catherine is putting her future as well as William’s political ambitions at risk if her herbal remedies fail to improve the princess’s health.

Kennedy has written a novel that portrays the political intrigue that existed in King Henry the VIII’s England; the harsh conditions of life in the 1500s; the danger for those forced to pledge allegiance to King Henry’s new Church of England, when their hearts still remained with the Pope in Rome. Catherine is a strong character, the lynchpin of her home and the City of Ladies; at times she comes across as a bit too strong—she seems to take things in stride at bit too much at times. But Kennedy has also created a character that doesn’t fit the stereotype of a nun—she’s a  complex character living in a difficult, dangerous time, whose loyalties and responsibilities compel her to make choices she considers right and best, not always safest.

Cheryl Russell received her MFA from Converse in 2013. Her work has appeared in Infuze, Title Trakk, Focus on Fiction, The Storyteller, Ruminate, and Rose and Thorn. She currently teaches at Malone University. She resides in Ohio with her family, but they would all rather live in one of their favorite vacation spots, Alaska. Read more of her blog posts at whythewritingworks.com.