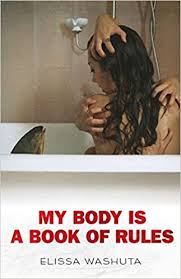 My Body Is a Book of Rules
Elissa Washuta
Red Hen Press
MSRP: $16.95

To call Elissa Washuta’s memoir “courageous” may come across as a simple platitude, and yet to not say so would be a disservice to this riveting, poignant book and to Washuta herself.

Washuta’s exploration of “uncomfortable” topics is unflinching and ranges from mental illness to race (Washuta being of mixed ethnicity and a member of the Cowlitz Indian Tribe) to the labyrinth of issues facing girls and young woman regarding sex and, finally, her own rape. My Body is not an exercise in navel-gazing—to the contrary, Washuta manages to keep the text engaging and entertaining even while bringing us across the roughest of terrain. She even invites us to laugh as we ponder the heavy material with a consistent, albeit subtle and, naturally dark sense of humor.

When I refer to My Body Is A Book of Rules as “courageous,” I do not only mean this in reference to the raw and revealing content, but also to Washuta’s style, to the multitude of forms she uses throughout the book to tell her story. Each chapter, section, and subsection receives its own unique and innovative structural treatment, and what is told to us narratively or shown us in scene is couched within these structures. One moment we are reading her doctors’ medical notes, next we are reading interviews of fellow female students about their feelings and views about their sex-lives, next an insertion of an imagined (but entirely feasible and representative) Cosmopolitan magazine quiz titled, “Are You Normal Down There?”, which, as with many of Washuta’s multi-media inclusions, eventually morphs from what the magazine article “says” to what a young, teenage Elissa hears; that is to say, the message she takes away.

Even facets of the sexual assault she experiences are told as if they are scenes in the TV drama Law and Order SVU. And these are but a few examples—brave writing for a debut book. We, the readers, are granted some breathing room—it is largely due to these stylistic choices that this otherwise “heavy read” is not only bearable, but engaging and relatable; while we see that Washuta is granted some narrative and necessary mental distance from the content by these formats (also revealing much about her mental state), by choosing familiar media constructs in which to place her own subjective experiences, we see these brought into the broader cultural landscape—the one which we all inhabit—thus making her personal story personal to the reader, as well.

This technique of placing her unapologetic subjective views and personal story into a larger cultural context begins on page one. In explicating a few of the functions this very first intriguing choice and multi-media inclusion does for the text, we get a feel for just how thematically intentional Washuta’s structural choices are. Instead of beginning her memoir with “her own” story, or her own voice at all, the first page is a formal, historic military letter, one which coldly describes the execution of Native Americans in 1856  with grotesque detail and a quick inventory of the dead. Washuta’s only contribution to this page is one sentence after the letter:

“Tumalth[1] begat Mary who begat Abbie who begat Kathleen who begat Leslie who begat Elissa.” This historical letter did not so much “invite” me into the text, but instead reminded me that I already was a part of it—after all, this not-so-far-back piece of American history is a tragic legacy that we, as Americans, are all part of. I, too, am but a few “begats” away from these horrific events, from this genocide of the natives of our country, and yet, this “history” is woefully under-discussed and is still playing out today.

Washuta’s choice to follow this letter with a simple sentence, lacking commentary of any kind, simply (and pointedly) using the biblical word, “begat,” to show the line of lineage from one of the executed “Indians” in the letter directly to the “begetting” and existence of our narrator and protagonist, Elissa Washuta, herself, solidifies the truth of this “living history” of which we are all a part. It lends concreteness and weight to the narrative to come and makes us already feel connected to Elissa—pulls us into rooting for this narrator whose “very great”-grandfather was unjustly murdered. That’s a lot of work being done by the first page of a memoir.

Washuta’s courage as a survivor of sexual assault—as well as adversities and traumas of differing shades and complexities—and as an ambitious writer with a unique vision has paid off in the form of many award and accolades including being a finalist for The Washington State Book Award.

Washuta’s next book, White Magic, a collection of linked essays which promises to again weave together and juxtapose the personal—her ethnic identity, heartbreak, addiction, and the practice of witchcraft—with cultural critique considering such figures and topics as Stevie Nicks, Twin Peaks, and The Oregon Trail II, is set to be released April 27th of 2021.

My Body Is A Book of Rules should and shall become a staple in the modern creative nonfiction canon as a quintessential example of how material can be approached and stories told wherein the standard conventions of plot- or even character-driven narrative prose are not well-suited to the content or do not serve the overarching themes of the text, particularly when treating trauma and personal suffering which is more-rightly rendered as universal as situated in and propagated by societal norms and ills.

Creative nonfiction is uniquely situated to take on significant, subversive, and traumatic subject-matter in a time in which such writing is needed and in demand, and innovative styles like Washuta’s are uniquely suited to take the genre in this direction.

Amber Wood is a recent graduate of Converse College’s creative writing MFA program. Writing aside, she is a teacher, mother, and activist. She sometimes writes under the pen name, “Maya.” She is currently searching for a home for her own (what she hopes will be described as) “innovatively-styled” memoir.