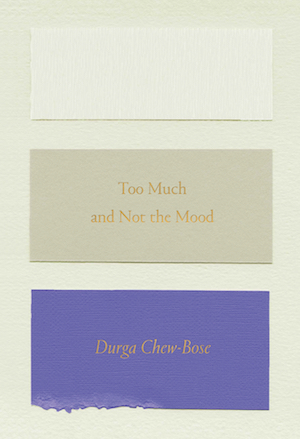 Wonder and wander.  Are there any two words in the English language that so beg to be confused, that so invite a writer to make that small, but embarrassing error of choosing the incorrect vowel (or that so tempt a writer to err—to fail in resisting the urge to play, to write something trite like, “Is it any wonder that our minds so wander as to mix up these two words?”)?  But in the throes of errors and erring, wondering and wandering, in and through the mind, writing, and life, we indeed find commonalities and overlap (the Latin meaning of error being, after all, “wandering about”. . .), and in the middle of all this, an up-and-coming writer, Durga Chew-Bose, who with candid style and a nearly bemused portrayal of the self, welcomes the reader to join her in her own wonderings (if we deem her qualified to do so), stating of this self, “Being wowed by fruit or cake batter [. . .], yet fairly sure I’m okay with never seeing the Grand Canyon in person, ought to disqualify me from ever writing about wonder.  Then again, maybe that’s why I’m drawn to wonder: it pays no attention to priorities.”

This spirit of exploration and questioning of the self, the generative, creative “self” in particular, is at the heart of Chew-Bose’s 2017 debut book, Too Much and Not the Mood—as should be expected, as the namesake of the book is a line excerpt from Virginia Woolf’s, A Writer’s Diary (published and edited postmortem by her husband).  This world- or page-weary statement was written in one of Woolf’s journals long into her accomplished writing career, and refers to a lingering self-doubt, fear that she wouldn’t be understood, and exhaustion at the thought of yet more proof-reading and editing.  For as we know, Woolf was thrust into the position of speaking (and writing) for and in defense of all women who had, were, and would wield the pen.  An exhausting role, indeed. Known for her lengthy, but meticulous writing, it is safe to assume that Woolf wrote this way not only for the love of the word and because it was natural to her style, but because she, in her time, could not afford to err.  Therefore, Chew-Bose, in so naming her collection of personal-essays, ripe with risk-taking—both in style (much of it very nearly “stream-of-consciousness,” and one essay written of the self in third-person, to give just a couple examples), and in its raw, honest exposure of the self, its daring to “. . .pay no attention to priorities”—seemingly takes Woolf’s sentiment as a challenge.  In effect, she transforms Woolf’s lamentation into a battle-cry, and then responds in kind.

As any good book—and Chew-Bose’s debut has been well received, still garnering more attention and praise yet—Too Much and Not the Mood takes the reader on a journey, but not of the typical sort; indeed, those who would approach the book geared up for a hike over Freytag’s pyramid (let alone the Grand Canyon) would surely find themselves lost, and possibly disappointed; for this is, again, a journey of the mind—or more aptly, through the mind, of the “other.”  It’s a book more for the wanderer than the journeyer, for the lover of words and those, likewise, “drawn to wonder.” It is for the reader who is happy to travel seamlessly from contemplating the life of a gold-fish to reveling in the power of music, specifically the kind that “resuscitates teenage residue and threatens emotional relapse,” that “discovers a new, hallucinatory wilderness: a pink desert, pewter trees, emerald skies, clouds that sprint by,” or that even elicits “Unsophisticated idolatry,” what is commonly called the guilty pleasure, “with nowhere lyrics that repeat one word over and over like a hymn written in neon-tube lighting.”

This is not to say that there are not tangible stories being told in Chew-Bose’s personal essays.  To the contrary, for all her musings and reflections, we are rarely far from the action taking place.  In fact, it is this blend of Chew-Bose’s raw, almost rambling thoughts and the real-world experiences that spur them—from baby-sitting, to going out on a date—that makes her writing so approachable and relatable.  There is a real-time feel to her writing (created only in part by her propensity to write in present-tense), that gave me the sensation of experiencing and wondering along with Chew-Bose, rather than being an outsider simply witnessing the events and thoughts of the narrator/subject.  While we are, to be sure, submerged in the mind of Durga Chew-Bose, there is such a universality in the experiences and topics she chooses, and such a familiarity to the wandering from thought to thought—one moment, in the moment, the next, in a memory or musing, and then back again—that, at least for this reader, I sometimes wondered if it was I in Chew-Bose’s mind or the other way around.  In and of itself, the power to break through the boundaries of self and other, no matter the topic, is one of those grandest of goals for writers or artists of any ilk. I’d venture to say Chew-Bose accomplishes this through her artful blending of style, relatable subject-matter, tangibly warm tone, and by beginning with the mind, which we all know to be nonlinear, and hereby bringing us to the matter, which she shows to be much the same. Via her fresh and undeniably unique voice and, of course, her willingness to err, Chew-Bose extents a welcome mat to readers who may have felt alienated by the unconventional forms she evokes in the past.

Maya Wood is an MFA candidate at Converse College and an award-winning writer of creative nonfiction, poetry, and fiction. She is currently working on a collection of linked personal essays, exploring issues such as class divide, trauma, and abuse, but also the power of the human spirit, beauty, and joy (for, as she reminded her son recently in reference to her essays, there is “that funny one!”). She loves teaching, photography, and (of course) cats.