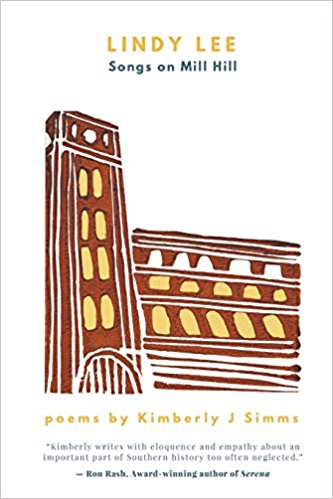 In her debut book of poetry from Finishing Line Press, Lindy Lee: Songs on Mill Hill, Southern poet Kimberly J. Simms chronicles the lives of textile workers in the rural Southern Piedmont. The poems reflect not only the hardscrabble lives of mill workers in the early 1900s, but more so, the grit and self-reliance upon which these families subsisted and survived.

Simms’ characters have “lungs full of lint,/calloused soles black with machine oil/and three meals a day of dry cornbread,” where grueling work and the hierarchies of power create lives where “Pure/pressure seals us tight.” Such juxtapositions throughout the collection weave together important glimpses into the quotidian daily experiences of the Carolina mill worker.

In tightly-woven poems, often using the rural vernacular of the time, readers are quickly ushered into the lint-filled, grimy, sweaty brick halls of the mill, where men, women, and young children often toiled 15-plus hours a day, where mill owners and operators controlled almost every part of their workers’ lives.

“Shift Bell: A Found Poem,” paints a vivid image of how mill work defined workers’ lives, as if the thread spinners, loom weavers, doffers, smashers, and slashers had no meaning beyond productivity. The stanzas juxtapose the long hours—4:30 a.m. until 9 p.m.— with the little pay—3 to 13 cents per hour. The poem ends with an inscription found on a bell at the mill:

I arouse the slothful,

I call the people to work.

I announce the Sabbath Day,

I warn ye how your time passes away.

And say, “Gloria in Excelsis Deo.”

That hard work is tied to godliness, that duty is tied to glory, was not lost on these workers: “But here, the looms are so stretched out/they shriek and jerk like sinners/in a circle of fire.”

In addition to the numerous Biblical allusions throughout Simms’ collection, the natural world features prominently. In many poems, nature’s rhythm pulsates with the rhythm of work—“Six days a week I stand at the frames,/Dreamin’ of the songs of pulsing cicadas”—simultaneously situating labor as a natural process and casting such as antithetical to nature. Simms uses nature language to propel her chaw-chewing female workers into pictures of ethereal beauty: “Little white flowers/of lint drift/from our hair,” while in reality, the body “sags, warps like pooled glass.”

In the longest poem of the collection, “Muscadines,” Simms describes her title character, Lindy Lee’s, sexual assault, pregnancy, and still birth, at the hands of the mill operator who is “whispering of mill positions,” reminding us who held the power in these communities. Instead of fighting for justice, Lindy Lee hopes to be “washed/with forgiveness,” to be brought to Jesus, all while her “Mama’s Methodist/church is full of whispers and turned cheeks.”

While mill scenes dominate the collection, Simms also paints a picture of joy. Teens swim in a watering hole, old men whittle on the porch, mandolins and fiddles cut the night air with sweet song. There’s baseball, Christmas celebration, singing, and marriage. Simms describes a full-bodied culture defined not only by work, but also by wives’ tales, superstitions, and omens, where belief in haints caused folks to paint porch ceilings blue. In this way, she helps contemporary readers understand the totality of life in the mill hill.

Peppered throughout the collection are stirring black and white images of unidentified child mill workers, taken by Lewis Hine, from his work for the National Child Labor Committee from the Carolina Piedmont region from 1908-1915. These poignant images, which were instrumental in leading to child labor laws, work in conjunction with Simms’ text to create a comprehensive portrait of the times.

In Lindy Lee: Songs on Mill Hill, Kimberly Simms captures the paradox of the mill communities: those bound together not only through hard working and living, but through the grit that defines human perseverance and survival, all of which “You get so used to doing, it’s hard to stop.” In doing so, she helps bring to light the personal stories of those typically reserved as a footnote in Southern history.

Kathleen Nalley is the author of the award-winning prose poetry collection, Gutterflower (Red Paint Hill Press), as well as the poetry chapbooks Nesting Doll and American Sycamore. She holds an MFA from Converse College, teaches literature and writing at Clemson University, and finds books their forever homes at M. Judson Booksellers in Greenville, S.C. www.kathleennalley.com