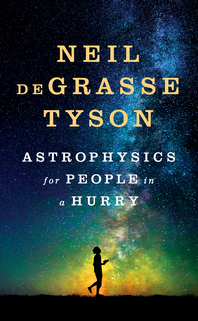 The latest installment of digestible science from (almost) everyone’s favorite astrophysicist, Neil deGrasse Tyson, is aptly titled, Astrophysics for People in a Hurry. The title caught my attention first, then seeing that it was, of course, a Neil deGrasse Tyson work, I knew I was in for an entertaining look at our universe. Tyson has made a name for himself as an approachable genius. He frequents social media, answering questions from troglodytes like myself, and hangs out with us in our living rooms via local PBS specials. He feels like the really nice guy who lives next door and just happens to have graduate degrees from some of the Nation’s most prestigious universities. True to his brand, Astrophysics for People in a Hurry delivers the story of the universe and the world around us in much the same way.

Tyson opens with a bang— the Big Bang—told in a Biblical bedtime story style. “In the beginning, nearly fourteen billion years ago, all the space and all the matter and all the energy in the known universe was contained in a volume less than one-trillionth the size of the period at the end of this sentence.” From there he bounces from Einstein to Planck’s quantum mechanics and the suspected shotgun marriage of the two theories. He even throws in a few very intimidating numbers, but the way in which he presents the material is both engaging and encouraging. It’s as if you can read between his lines things like, “It’s okay if you don’t understand exactly what this means right now. I’m just glad you’re here with me.” Or, “Check out these crazy words, can you belive I get paid to use them? They actually mean something really interesting that is simple to understand.”

Toward the end of the book he presents a cosmic perspective, meant to inspire, not defeat our sense of humanity and importance. Along the way Tyson covers topics like dark matter (always sexy and mysterious), dark energy (something new to toss around my brain), to what it means to be round and a quick trip through the theory of evolution. Each essay is not only easy to read and understand, but the book itself is a good one to keep on hand for quick reading in long lines. Creative writers will find ample opportunities for imagination to wander through these pages of cosmic possibility and amateur science nerds will want to have a highlighter at the ready for quick facts and impressive party lines. Originally, these essays appeared in Natural History magazine at various times from 1997 to 2007. They are collected here, along with Tyson’s signature tongue-in-cheek wit and wisdom, in a book that doesn’t disappoint readers interested in the cosmos at any level.

And even if you aren’t keen on learning about the sun or how light interacts with matter, or how much we do and don’t know about the world around us, Tyson’s Grammy nominated audiobook performance makes for an excellent bedtime listen to induce peaceful dreams of molecules and tesseracts. Okay, so there aren’t any tesseracts—you’ll need L’Engle for that. But we can always hope that his next collection will include something along those lines.

Gwen Holt was raised in the wilds of rural Idaho but found her heart in New York City. She worked at many interesting jobs before settling in as a mother and writer.  She now resides in North Carolina with her husband, four children, eight chickens, a fluffy dog, and two suspected serial killer cats. She is pursuing an MFA in Young Adult literature with Converse College and has served South 85 Journal as a Fiction Editor. She is also the winner of the Southeast Review 2016 Narrative nonfiction prize for her short story, “The Ditch Bank and the Fence Line.”