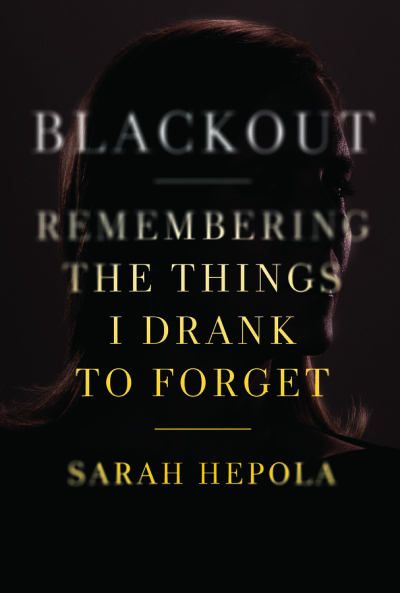 As a reader who cannot herself decide if she is an alcoholic (high-functioning), sugar-addict (serious problem), or control-addict (aren’t we all?), Hepola’s story doesn’t elucidate any single dysfunctional path or subsequent way home as a traditional self-help book might.  However, Hepola’s honest, hopeful, and decidedly un-preachy story is inspired and ultimately resonates with my own life experiences, as all truthfully-told and soulfully-spilled memoir can.  If you think this sort of thing doesn’t apply to you, you’d be surprised. More revelation than sensation, Blackout is not just fodder for the rubbernecking reader, but an open-hearted story that will resonate with anyone who has ever doubted themselves, lost control, or required forgiveness. Hepola’s gripping and surprisingly inspirational account of her journey through alcoholism will stir (and at times disturb) a number of failed, neurotic and intrinsic coping mechanisms reluctant grown-ups employ to face the inevitable: life.

Hepola’s story is firmly rooted in the context of her coming of age in the mid-90s: a time concurrent with the rise of Rohypnol and society’s tacit acceptance of an alcohol soaked, binge-drinking culture, one specifically dangerous for young women.  It was a time when “date rape,” “walks of shame,” “getting smashed,” and “raging” were all par for the course for the average, middle-class college girl. Wouldn’t it be great if we could say that was a long time ago and things have changed?  But it wasn’t, and they haven’t, which makes Hepola’s personal memoir also a relevant and necessary social commentary.

As I read Hepola’s memoir, I got the sense that her demons and mine were probably long lost college friends, girls who wished they’d met but never did.  Funny how one’s personal truth can be so universal.  Not ready for demons?  Don’t worry, Hepola crafts her narrative in an entertaining, disarming and refreshingly secular way.  Before you know it though, you are diving into the deep, watching Hepola circumnavigate, barrel down, and ultimately re-route her destructive path.  The reward for all of us at the end is Hepola’s hard-earned pearls of wisdom:

Addiction was the inverse of honest work.  It was everything, right now.  I drank away nervousness, and I drank away boredom, and I needed to build a new tolerance.  Yes to discomfort, yes to frustration, yes to failure, because it meant I was getting stronger.  I refused to be the person who only played games she could win.

Sarah Hepola dedicates this book on the front page to “anyone who needs it.”  Not sure if this book’s for you?  Better to read it and find out than to miss this revealing and uplifting narrative. Worse-case scenario, drinker or non-drinker, you’ll become a better human.

Kathy Garvin is a graduate of the Converse MFA Creative Writing program.  She currently teaches writing at an independent school in Greenville, SC, where she lives in mostly joyful chaos with her husband Jonathan and their three children, three cats, and three chickens.