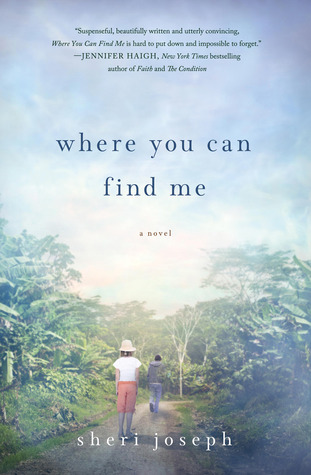 Caleb Vincent was eleven years old when he was abducted. Three years later the FBI has found him and returned him to his family in suburban Atlanta. As Caleb is hounded by the media and voyeurs and faces the beginning of high school, any degree of freedom seems impossible. His mother Marlene decides to move the children far from prying, prurient eyes to her mother-in-law’s farm in the Cloud Forest of Costa Rica. The family adjusts to a new life in Costa Rica with some success. They learn Spanish, enroll in school and make friends – a semblance of normalcy. But then the past comes calling and Caleb is forced to choose whether he will remain with his family, with which he no longer feels sure he belongs, or return to the life he came to know when he was taken.

Where You Can Find Me by Sheri Joseph is a stunning psychological portrait of a family in the wake of tragedy and an unflinching exploration of their attempts to move forward. The maelstrom of conflicting emotions Caleb must carefully pick his way through is excruciating. Who is he now? Is he gay or straight? Is he permanently damaged? Is the person he used to be gone forever? Does he even deserve to be back with his family? Must fundamentally: is he good or bad?

While the premise of Where You Can Find Me is not particularly original – there have been several books in the last few years about kids who are returned – the author’s treatment of her subject sets her work apart. Josef does not shy from uncomfortable facts or emotional dilemmas that will make you squirm but neither does she present them in a lascivious fashion. Her goal is not to shock you but rather to coax you into considering the situation without knee-jerk reactions. Rich with insight, Josef’s prose is candid, but respectful, and her ability to imagine the profound cross-currents in this situation and engender empathy in circumstances that most of us can’t personally relate to, is remarkable.

The characters in Where You Can Find Me are well-defined and believable. You can tell when characters are individual and complex because they are flawed. You won’t always like the characters in this novel. Marlene can be flighty and irresponsible; Jeff can be reserved when he ought to be offering more of himself; little Lark, Caleb’s younger sister, is an anxious perfectionist who tries desperately to be mature beyond her years but, perversely, this sometimes lends her the peevish air of a petulant toddler.

As horrific and impressive are the large plot points in Where You Can Find Me, it’s the small details in this story that bring you up short and convey the magnitude of the changes each family member has endured. The simplest acts are fraught with possible pitfalls. “At the table that had been purchased the same year as the house, they sat for dinner, unable to remember who sat where.” Caleb’s father watched his son play the piano and wearing his glasses, neither of which he did before he was taken, and struggled to relate to this child as he is now, not as he was. “He was healthy, polite, so clearly present in his watchful way behind those glasses, and yet. Whose child was this? Over time, some tether must have snapped. Or had Jeff only let it go? The boy in his house belonged to others, …”

While the concept for this novel is usually found in a thriller, this is not a suspenseful action-packed story. The pacing can be somewhat slow in places. Josef has crafted a psychologically complex narrative where everything exists in shades of gray. There are no black or white absolutes to be found anywhere. If you prefer stories that deal in moral absolutes with clear good guys and bad guys you might want to look elsewhere. But if you feel like challenging yourself or are more comfortable with realism than parable, I highly recommend Where You Can Find Me.

Michelle Newby is a writer, reviewer and blogger at www.texasbooklover.com. Her reviews appear regularly in Monkeybicycle and are forthcoming in World Literature Today, Concho River Review, and Prime Number Magazine. She is at work on her first collection of short fiction.