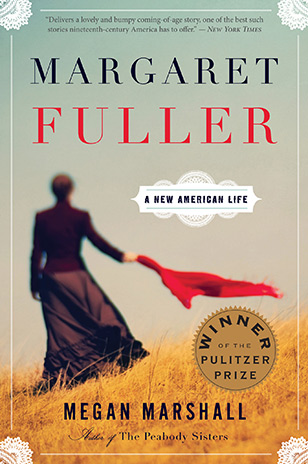 Megan Marshall, author of The Peabody Sisters and winner of a Pulitzer Prize, has offered another accounting of an uncommon woman of her time. Margaret Fuller is a name tragically forgotten and overlooked in today’s study of nineteenth century literature, overshadowed by male visionaries such as Ralph Waldo Emerson, with whom Fuller was longtime friends. Marshall describes Fuller as a genius, educated in Latin, music, literature and logic by her father from the age of six.

(Sarah) Margaret Fuller was a prodigy in the art of conversation and speech. Unfortunately, that set her apart from children her age and caused relationship difficulties—with girl friends and men alike—that endured for her entire life. Perhaps this canyon between herself and her peers is what drove her to seek equality for women who were not educated as men were in the 1800s. Fuller is best known for her Summer on the Lakes and Woman in the Nineteenth Century, the latter becoming America’s first impactful feminism publication. She was literary editor of the New York Tribune, the first female European correspondent, and the only woman employed at the paper by Horace Greeley. Late in her short life, Fuller served as “Regolatrice” of a hospital during Mazzini’s Roman Revolution, and romantically attached herself to a soldier, but the revolution ultimately failed, forcing Fuller to sail back to America and her death.

Marshall tells this life, this bildungsroman, eloquently and with the skill of an accomplished storyteller. Written mostly chronologically, the unfolding of Margaret Fuller’s accomplishment is fairly seamless, embellished by a heavy usage of quotations from Fuller and her contemporaries. Marshall employs a tone similar to Fuller, which makes for easy transitions between the two, allowing the reader to focus fully on Marshall’s development. It is obvious that Marshall is a master researcher. She pulls reference and quotation from all who surrounded Fuller, such as Ralph Waldo Emerson, Henry Thoreau, Bronson Alcott, James Clarke, and Nathaniel Hawthorne, which seemingly leaves Fuller’s life with no holes—wholly remembered and recorded. Marshall brings the reader into Fuller’s innermost thoughts through her writings, weaving her story with Marshall’s signature well-varied syntax and declarative, factual confidence.

Of course, confidence is not everything an author needs for an award-winning book. Marshall was plagued occasionally by the need to fold her chronological timeline back upon itself to logically explain the entire story. These reversals of time are badly marked, though occurring infrequently, so that the reader may be quite a ways into the story before realizing the clock has been turned back. There are references to Fuller’s contemporaries, which many readers will recognize, though many will not. For example, the name Nathaniel Hawthorne does not instantly bring The Scarlet Letter to mind, though its reference would greatly enrich the reader’s appreciation of Fuller’s friendship with such a writer. Such connections would not have detracted from the story, but Marshall must have neglected to see its value. Likewise, “Roman fever” (the oldest term for malaria) is referenced, but not explained. In following pages, “malaria” appears, but in no connection with “Roman fever.” Such inconsistences require the reader to research what could have taken the author no effort to explicate.

Despite its minimal blemishes, however, Margaret Fuller is not a book to miss. Megan Marshall confidently writes with great compassion and eloquence regarding the life of feminism’s first great champion. Fuller is portrayed with complexity—sensitive and strong, brilliant and lost, knowledgeable and sheltered. Educated readers familiar with writers in the nineteenth century will find a treasure trove in Marshall’s connections between the Transcendentalists and visionaries that formed a community of literary minds on the streets of Boston and New York.

Marshall flatters Fuller as a woman who deserved each milestone she earned: editorship of The Dial, a transcendentalist journal run by Emerson, Fuller, Alcott, and George Ripley, and publication of The Great Lawsuit, for starters. Fuller was not a well-liked person, with a spinal curve and mostly unattractive features, but Marshall focuses on the admiration those within earshot had for her. Her speaking ability was legendary for a woman, so much so that she hosted Conversations which taught women to use logic in conversation, and therefore she often left others in a state of awe. She was an inspiration for a time of change that she did not live to see, but the fortitude that Marshall portrays in the small auburn-haired prodigy is what earned her a place in history as a soldier for social reform. Marshall is one of the best memoirists today and should be read, and often.

Davina Black is a freelance writer who regularly contributes book reviews and articles to magazines, including glo, Home, Indoor and Outdoor Living, and Senior Life (Indiana). Article topics have included human trafficking, health, parenting, ballet and current issues. A graduate from Indiana Wesleyan University, Black has a B.A. in Writing, a ballet pedagogy certification, and a career as a stay-at-home mother. Black currently reads over six new books every month, though modern authors such as Faulker are her preference, and she indulges in writing poetry in her spare time.