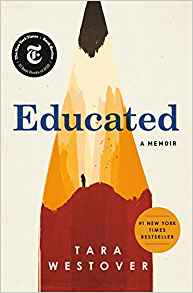 Tara Westover’s debut memoir, Educated, is by far one of the best books I have read this year. It is a tale of a young girl caught in a web of deceit from a loving, survivalist family full of religious conviction and determination. She is forced to make difficult choices that cause her to sacrifice everything she has ever known in order to accomplish more than she ever dreamed.

From the first to the last page, I was mesmerized, tense, and cringing with each painful encounter, as I embraced the fear, and sometimes naivety, of a little girl trapped in a seemingly hopeless situation. Through her unique narrative and beautiful lyrical language, Westover pulled me into the memoir’s vivid scenes. Her compelling characters both frustrated and stirred compassion in me.

Educated is reminiscent of days gone by, of simpler times. Yet, it unexpectedly brings the reader back to reality when it quickly becomes apparent that this story didn’t take place in the 1950’s or 60’s as one might first assume, but in the 1990’s—well after the time children were known to drop out of school to help out on the family farm, well after federal regulations were established to mandate the education of children, and well beyond the time this sort of upbringing was considered acceptable, or anything close to normal.

And there is nothing normal about Tara’s childhood. “I am only seven, but I understand that it is this fact, more than any other, that makes my family different: we don’t go to school.” While this points toward the central theme of the book, it is by far not the only thing that makes her family different. She expertly weaves the other unique aspects of her story into this central theme as we watch Tara’s thirst for knowledge take her on a journey from an ignorance of basic historical events like the Holocaust and the Civil Rights Movement, to earning a Ph.D. from Cambridge University.

Tensions mount with every chapter of Educated. Its pages are full of intrigue and conflict. Her father puts her and her brothers, the entire family at times, in physical danger, and it’s unclear whether it’s out of negligence, ignorance, or just plain stubbornness. Serious accidents and injuries occur with appalling constancy. Even when the father himself is severely wounded, he sticks to his convictions so soundly that he almost dies. His actions reveal the true depth, and deception, of his convoluted beliefs.

Westover highlights her father’s other idiosyncrasies as well: his preaching against and family forbiddance to drink milk, governmental conspiracy theories, and a conviction that the world is coming to end—The Day of Abomination, which he is convinced is Y2K. Westover asserts that they were different than other believers because they didn’t just “believe,” they acted. “My family boiled and skinned peaches, pitted apricots and churned apples into sauce. Everything was pressure-cooked, sealed, labeled, and stored away in the root cellar Dad dug out in the field.” As her story progresses, Westover’s description of her father’s bizarre behavior, seems to point toward a mental illness, which she later speculates is bipolar disorder. Though she can’t be sure as he boycotts modern medicine and only believes in God’s healing power and in his wife’s natural healing remedies.

Tara’s brother, Shawn, creates additional conflicts with his cruelty and abuse. His ongoing violence toward Tara routinely traumatizes the reader. Westover seems confused by her family’s sympathy toward him and how they blindly attribute his abusive nature, at least in part, to a brain injury that occurred during one of their many family mishaps. There is also alleged abuse toward other family members that is either ignored, justified, or worse yet, not believed. The violence escalates until the family dog is brutally stabbed—and still the problem is ignored.

Early in Tara’s childhood, the one saving grace seems to be her relationship with her mother. Initially, her mother’s slight rebellion makes her seem trustworthy. In her, Tara seems to find a kindred spirit, someone to depend on as she matures into the woman she is meant to become and as she starts to assert her wants, desires and ambitions. Yet with each subsequent chapter, her mother’s support for Westover subtly diminishes and eventually one might wonder if it were ever there in the first place. Toward the end of the story, Tara arrives home unannounced and is effusively greeted at the door by her mother. Yet only moments later, Tara reads an email her mother sent earlier that day: “‘The spirit has whispered to me the truth about my daughter,’ Mother wrote. ‘My poor child has given herself over to fear, and that fear has made her desperate … I do not know if she is a danger to our family, but I have reason to think she might be,’” all because the “devil had a hold on her.” Tara leaves shortly after reading that email realizing she has made a terrible mistake in coming home. When she returns to town three years later, her mother refuses to see her. This change in their relationship feels like the ultimate betrayal.

Westover’s coming-of-age memoir is a poignant tale of love, loss, and enlightenment gained through education. She sums up her decision to separate from her family: “They were the choices of a changed person, a new self. You could call this selfhood many things, Transformation. Metamorphosis. Falsity. Betrayal. I call it an education.”

Tammy Ortung is a writer in the Spartanburg area and an MFA candidate in Creative Writing at Converse College. She retired from the United States Air Force in 2011, after twenty-five years of faithful service to her country, and is currently working on a memoir of her Iraq deployment in 2009. In her spare time, she builds memories with her five grandchildren, volunteers in her church and local community, and spoils her chocolate Newfoundland, Bronx.