“I have a good life but I must write because if I do not write a certain amount I do not enjoy the rest of my life.”

“To write as well as I can and learn as I go along.”

A couple of years ago, my husband and I lived in Philadelphia. He was a newly minted particle physics researcher for the University of Pennsylvania and I was slated to teach history of science and writing at Drexel University. The summer before our jobs started, we packed up our Nissan pickup in northern New Mexico and pointed ourselves eastward.

We experienced, shall we say, a bit of cultural shock. Settling into our faux chateau row house in West Philly, I found it difficult to concentrate on writing. I had a hard time blocking out the constant sounds of the City of Brotherly Tough Love. The clang of the trolley bell. The screaming negotiations over parking spaces. The neighbor’s dog running laps around the furniture. The honking, the honking.

One afternoon the first week in the city, it was particularly difficult to focus on an essay review for New York Journal of Books. As my attention wandered, I heard a faint pop!, pop!, pop! in the distance. I hurried over to the window of our third-floor apartment and I saw a guy hanging out the front window of a car, firing a handgun at the side of our apartment building. I was appalled.

I managed to jot down the license plate number and within five minutes, a police car arrived on the scene, lights flashing, and a couple of officers began to take witness statements.

Apparently, I wasn’t the only one in the neighborhood with a sense of civic duty. By the time I made down to the street level, the officers were interviewing a dozen or so people milling around the corner. Amazingly, all of these folks seemed to know each other – conversation hummed. One of the officers turned to me, ready to take down my statement.

He wrote it down in the first box on the form. His biceps bulged. A tribal tattoo peeked out of his uniform sleeve. He exuded Tough Guy.

His pen paused mid-stroke. Standing at a modest five-foot-four, this guy towered over me. He dipped his head down to peer over his aviator shades. “Occupation?” he asked again.

The cop turned and surveyed the crowd milling around us. I felt conspicuously overdressed in my slouchy sweatshirt and ratty yoga pants. The scene was an impromptu pajama salon straight out of Rent’s central casting, right there on west 48th Street. One bearded guy, in a tattered blue bathrobe, was describing a self-help book he was working on. A woman in a tres chic flannel set was chatting to another woman in bunny slippers about switching agents to one in New York. Another couple debated the merits of writing technical reviews. The shooting was merely an excuse for everyone to come outside and talk about writing – a teeming milieu of writers in an odd bit of street performance art.

The officer turned back to me. “You’re all writers,” he grunted, gesturing to Bunny Slippers and Company. He wrote “Unemployed” in box for my statement and strode off to interview the next bathrobed bohemian.

I was livid. I wanted grab the guy by the lapels, and scream, “Unemployed!?!? I’m not unemployed! I’m a WRITER! I’m an essayist! I’ve even published a book for god’s sakes!”

I turned to the guy next to me, ready to vent my irritation. He ran his hand through his uncombed hair and started talking about a travel memoir he was working on – his trip across the United States by historic railway.

I realized that I had gotten something so much better than career affirmation and my righteous indignation in that first week in Philly. As I had told Officer Krumke, I am a writer. And thanks to the Philadelphia Police Department, I had gotten a story. 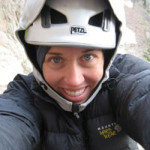 Lydia Pyne is a writer and historian based in Austin, TX. Her interests in literary nonfiction focus on history of science; her research and writing projects have ranged from South Africa, Ethiopia, Uzbekistan, and Iran as well as the American Southwest. She is the co-author of The Last Lost World and a contributing editor for The Appendix. She reviews history, anthropology, and literary nonfiction for NewPages and The New York Journal of Books.  Visit her website at http://pynecone.org, or follow her on Twitter, @LydiaPyne.